Sparkwing is the world’s first commercially available off-the-shelf solar array for small satellites. It is optimized for LEO missions requiring power levels between 100W and 2000W, and bus voltages of 36V or 50V. We offer more than twenty different panel dimensions, which can be configured into deployable wings with one, two or three panels per wing.

Let’s start with the basics (not for you pro’s)

There are no power sockets in space (yet). Satellites need power to operate once they are launched. Just like with your mobile phone, no power means no activity.

Solar panels help transform sunlight into electrical power for the operation of a satellite, making them a main source of power and thereby one of the most essential parts of a spacecraft. In the presence of sunlight, the electric power generated by solar panels charge the batteries onboard a satellite. When the satellite is away from sunlight, for example in eclipse i.e. in the Earth’s shadow, these onboard batteries ensure continuous power to the spacecraft.

A satellite can either have one single solar panel or multiple panels, depending on the power need and satellite dimensions. All solar panels combined, including the deployment mechanisms to open them in orbit, are often referred to as the ‘solar array’ subsystem. 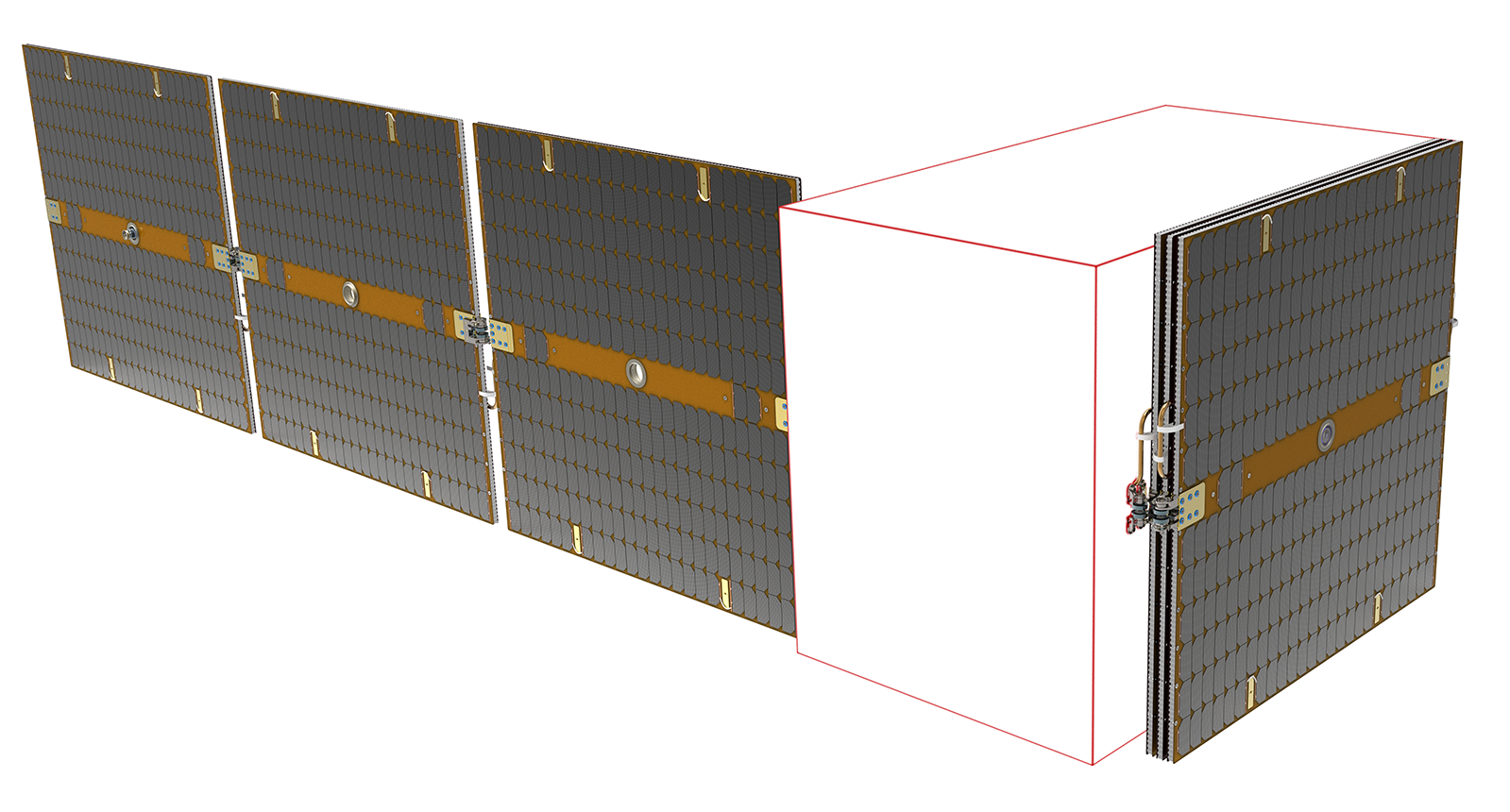 To get the right solar panels for your satellite, you need to consider the following:

2. Dynamic behavior – i.e. what happens to solar panels during launch and while in space: 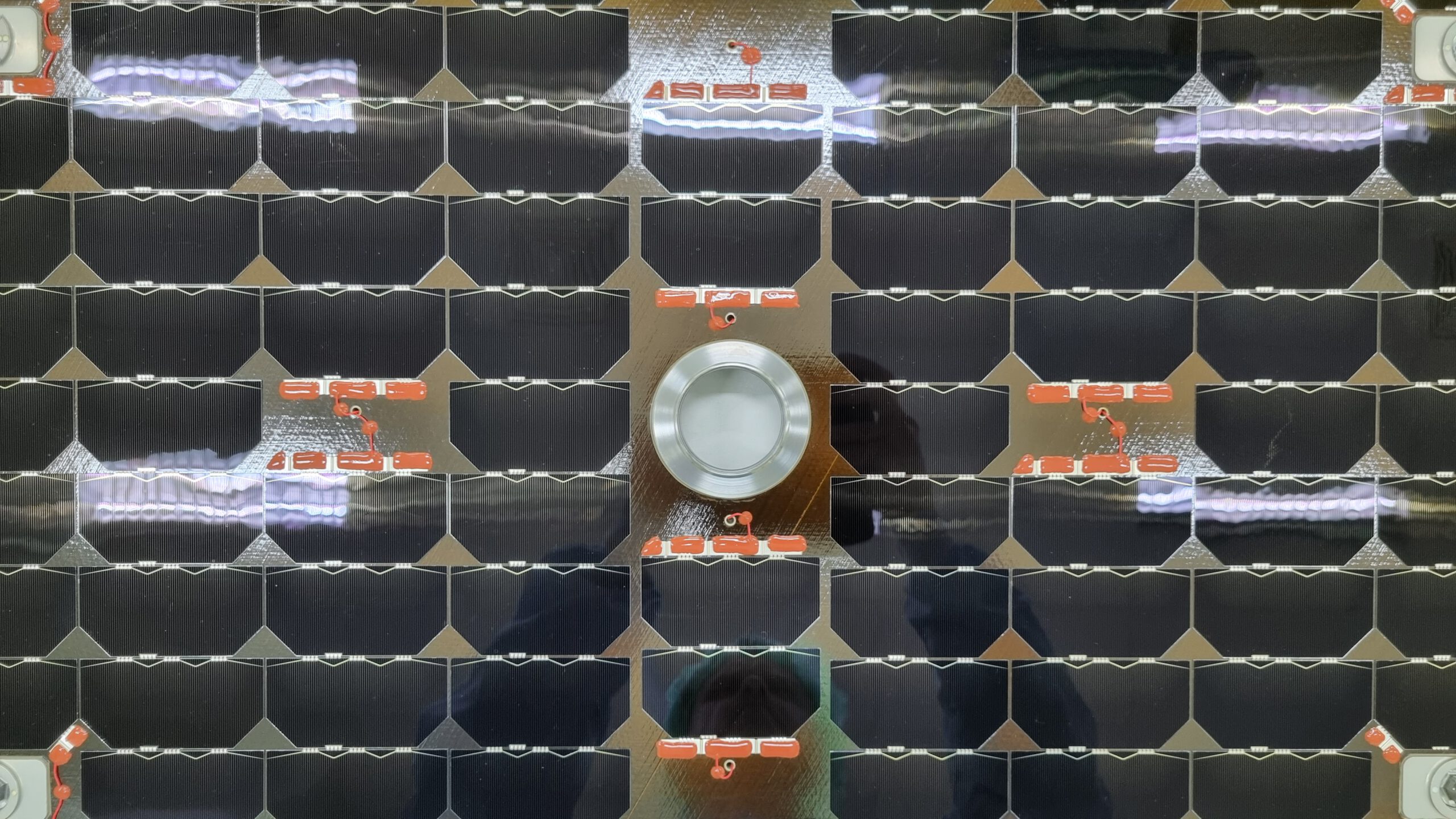 So how do you dimension your satellite solar panel? There are two main questions:

1. What is the power (Wattage) required from the solar panels?
The required power level is commonly achieved by characterizing a spacecraft’s power profile (i.e. the required level of power throughout the orbit), which depends mainly on:

2. What is the available volume (width x length x height) for the satellite solar panels?
The available space is usually determined by the size and configuration of the launcher and satellite. Also please check which sidewalls of the satellite are available for the stowed solar panel(s) and whether there are stay-out zones to be taken into account.

In the past, for every single satellite, solar arrays were designed and built to custom. With many new commercial actors in space launching large and small satellites, there is a paradigm shift in how we build solar arrays. In a growing and competitive market, customers demand reliable and affordable space products; this, in combination with technical advances (i.e. consumer electronics and other systems being adapted for space use) creates a demand for “Commercial Off-The-Shelf” (COTS) space products.

In 2018, the Sparkwing team decided to take on the challenge to create an off-the-shelf solar array for smallsats. By looking at common smallsat platforms and launchers (e.g. ESPA class and PSLV/Vega rideshare) and derived common satellite volumes therefrom. We were able to deduce standardized dimensions for solar arrays, determined common bus voltages and the optimal PVA lay-out for the standardized solar panel dimensions. As a result, we have made it happen… COTS solar arrays for satellites! 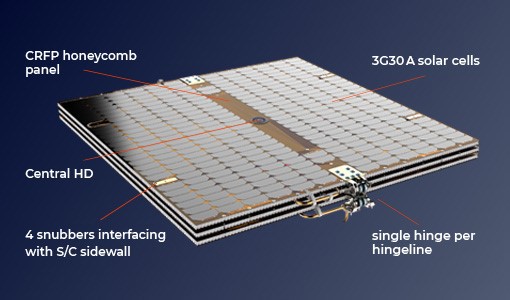 Apart from the value of getting a ready-to-launch product for an affordable price, Sparkwing comes with the following additional benefits:

Wondering if Sparkwing can power your next mission? Please find our product sheet here!